Click on markers in this image to learn more about Lance’s life:

On September 3, 2011 the Air Force Academy Preparatory School inducted Captain Lance P. Sijan into the ranks of its Hall of Fame. Even though Lance had attended Bainbridge Prep School in Maryland, the AFA Prep School recognized Lance’s extraordinary contributions to his nation and his engagement at the Air Force Academy. Janine Sijan Rozina spoke to the cadets challenging them to pursue their dreams. "This is your story," she said "Your parents have given you lift off, but now you have to become the man or the woman, as individuals, that you feel from within yourself." This flag that had been flown over the Air Force Academy during that induction ceremony was presented to the Sijan family that day and shares a home with many other flags presented to them over the years.

Lance getting into his F-4C in Da Nang

Lance entered the U.S. Air Force Academy on June 26, 1961. He graduated and was commissioned a 2nd Lt in the U.S. Air Force on June 9, 1965. After Pilot Training he earned his wings in August 1966. Sijan completed combat training in the F-4 Phantom II at the 479th Tactical Fighter Squadron, George AFB, California, and began flying combat missions in Southeast Asia with the 480th Tactical Fighter Squadron at Da Nang AB in the Republic of Vietnam in July 1967. Lance often accompanied his recorded messages back home to his family with photographs. In one of his recordings he sent along this particular image. “Some of us here find the anti-war demonstrators interesting to say the least. We have decided as a group to grow mustaches in protest to the protesters!”

Lance checking ordnance on his F-4C in Vietnam

Lance was a backseater in the F-4C Phantom Jet. Pre-flight checks were part of his job. Overall condition of the aircraft, fuel leaks, and secured landing gear would be on the checklist. Internal engineering design of the ordnance would not. Here Lance is pictured under the wing of his F-4C. Ironically, that ordnance is what led to the greatest challenge of his life.

Every class at the AFA designs and votes on their Class Crest, which is represented on one side of their ring. The Crest has to contain the following – the Polaris star, the class year, a saber, a falcon, the class number and the class motto. Cadets can choose their stone and engraving. Lance’s size 9 ring was 14K white gold, dark finish with an oval synthetic Blue Zircon stone. He ordered it as a junior from L.G.Balfour Company, it was delivered to him in June of 1964 and he wore it his entire senior year. Rings were worn with great pride as they symbolized a milestone – 3 years under their belt and 1 more to go! As a cadet, the ring was worn with the Class Crest facing inward, closest to their heart. After graduation, the ring is turned so that the Academy Crest is closest to their heart. As an officer, they are now ready and willing to protect and defend with the training they had received. In June of 1984, eleven years after the war and sixteen years after Lance’s death, the Sijan family was contacted and told that Lance’s AFA Class ring had been located. After months of negotiations, long-distance communications and help from President Reagan’s administration, the ring was returned to the family – the metal worn and scraped from untold circumstances that we may never learn.

Professional Family Portrait taken in the summer of 1967

Lance grew up in a typical midwestern family – with two strong loving parents, a younger brother by four years and an adoring sister, twelve years his junior. They spent summers at their lake cottage in central Wisconsin; fishing, swimming and playing cards with their cousins. Schoolwork and sports took up most of his time during the other months and of course everyone helped out at the family’s tavern business on the weekends. Lance was home the summer before he went to Vietnam. Just days before he was scheduled to leave, his mother felt a sense of urgency to gather the family together for a professional portrait. It was the last time the entire family was together.

Lance and his father Syl had heard about the new Air Force Academy (AFA) in Colorado Springs, Colorado. What a terrific opportunity for his college education, they had a great football team and he might even become a pilot in the process! The required appointment and application submissions were intense. He had to attend prep school for a year after high school just to prepare for entry - then finally the good news. He had been accepted. This self-portrait gives us insight into the strong will Lance had even at his young age. He was determined to get to the AFA and he did!

Playing football in the Sijan family was a given. Lance’s father Syl had been on the All City Championship Team in 1937 while attending Bay View High School in Milwaukee. He was recognized as the All City End. He taught Lance the important team values that make a good player - determination, focus and lots of practice. Twenty-two years later, in 1959, Lance followed in his father’s footsteps – being recognized as the All City End on the All City Championship Team for Bay View High School. The AFA football program proved to be a more formidable opponent. By his senior year he had earned the privilege of playing on the Varsity football team but the demanding obligations of academics and football drove him to have to choose between the two. Academics would have to rise to the top in order for him to graduate with his class. So with a heavy heart he put his dreams for playing Varsity football aside. He went on to graduate with his class in 1965 and fulfilling another dream - becoming a United States Air Force pilot.

Lance in his 1965 Red Corvette Stingray

Imagine the sun’s rays bouncing off a new red Corvette parked in front of your dorm at school. Now imagine twenty or thirty of them! That’s what it looked like at the Air Force Academy in 1965. General Motors had extended an invitation for the senior class to purchase their hottest model for a great price. Lance signed up along with many of his classmates. $3,801.84 bought him a dream come true and another opportunity to live on the edge as he pressed the pedal to the metal.

Name, rank and date of loss – three powerful facts engraved on a nickel-plated or copper bracelet. The idea came from two college students in Los Angeles as a way to remember the American prisoners of war (POW) and the men who were missing in action (MIA) in Vietnam. The price of $2.50 per bracelet was chosen to coincide with the cost of a student admission ticket to a movie – surely everyone could afford that! On Veterans Day, November 11, 1970 the program – by now sanctioned by the League of Families -was officially kicked off and eventually they were receiving over 12,000 requests a day. Lance’s name was engraved on hundreds of bracelets; the Sijan family has received letters and pictures and returned bracelets over the years by many of the original supporters and their families. Lance’s parents had gold-plated bracelets made for themselves and wore them for the rest of their lives.

Medal of Honor Citation: While on a flight over North Vietnam, Capt. Sijan ejected from his disabled aircraft and successfully evaded capture for more than 6 weeks. During this time, he was seriously injured and suffered from shock and extreme weight loss due to lack of food. After being captured by North Vietnamese soldiers, Capt. Sijan was taken to a holding point for subsequent transfer to a prisoner of war camp. In his emaciated and crippled condition, he overpowered one of his guards and crawled into the jungle, only to be recaptured after several hours. He was then transferred to another prison camp where he was kept in solitary confinement and interrogated at length. During interrogation, he was severely tortured; however, he did not divulge any information to his captors. Capt. Sijan lapsed into delirium and was placed in the care of another prisoner. During his intermittent periods of consciousness until his death, he never complained of his physical condition and, on several occasions, spoke of future escape attempts. Capt. Sijan's extraordinary heroism and intrepidity above and beyond the call of duty at the cost of his life are in keeping with the highest traditions of the U.S. Air Force and reflect great credit upon himself and the U.S. Armed Forces. – President Gerald R. Ford – Lance’s family traveled to Washington D.C. and President Ford gave Syl and Jane Sijan their son’s Medal of Honor posthumously on March 4, 1976. 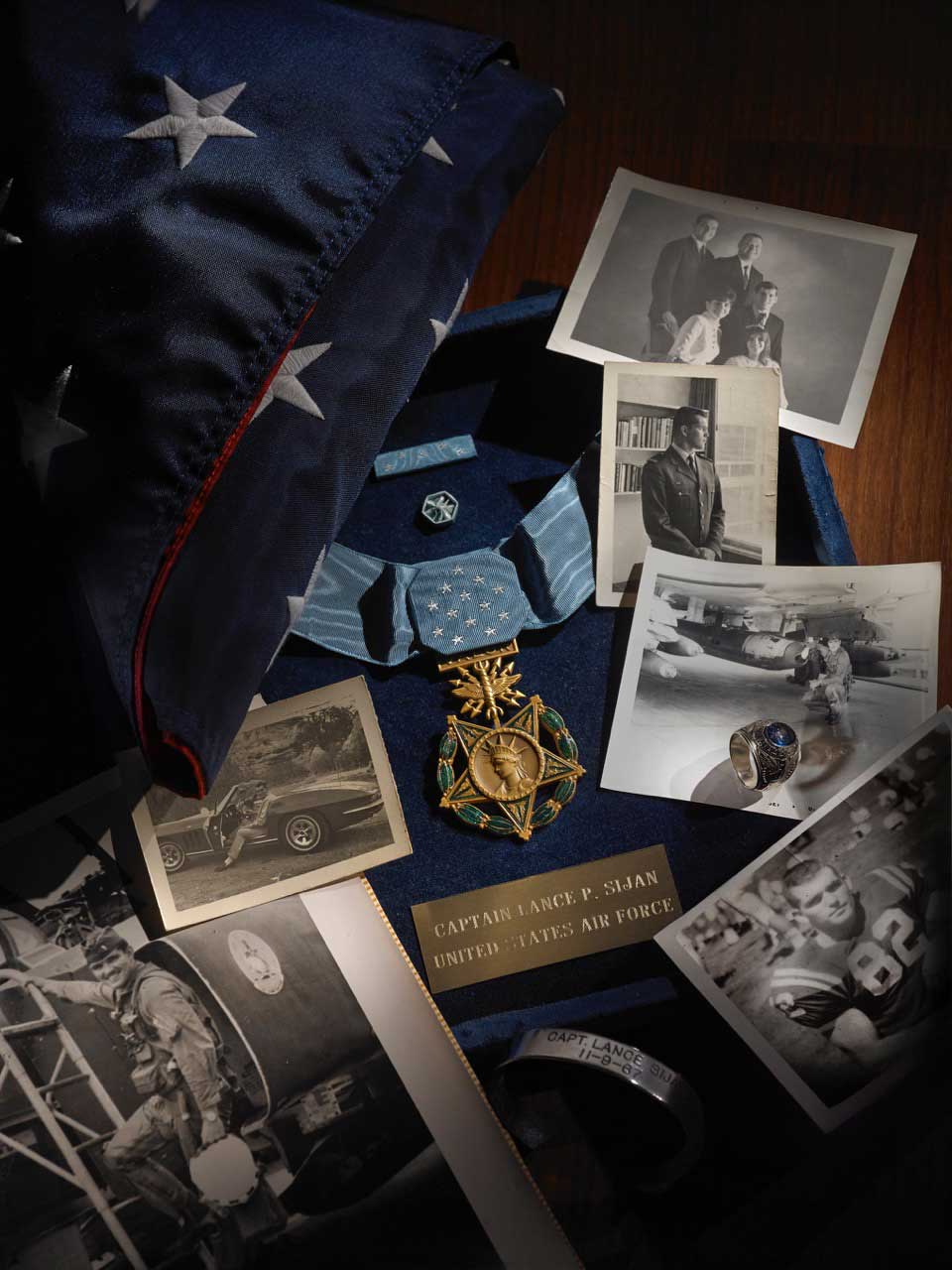